Ghosting: what it is, the reasons for it, and the consequences of doing it in a professional setting

Several studies confirm what has become a reality for recruiters and companies: “ghosting” is a growing trend in the market, driving up recruiting costs and time.

The concept of ghosting comes from the word “ghost”. Often used when talking about personal and romantic relationships, the practice has been adopted in recent years by human resources personnel to define candidates who disappear without so much as an explanation during or after the selection process.

Another study by Robert Half with 800 senior managers in Canada showed that four in 10 interviewees (43%) said that it is more common for candidates to cease communication now than it was two years ago.

Some companies say that candidates are “severing ties” during the selection processes, but there is also a portion that passes the process but fails to show up on the first day of work.

At what point does Ghosting happen?

The company considers itself to have been “ghosted” whenever the candidate abandons the process after having confirmed interest in the position. A significant number of professionals even sign the employment agreement and then simply just don’t show up for work.

According to research performed by Indeed in 2019, these are the points at which ghosting may occur: 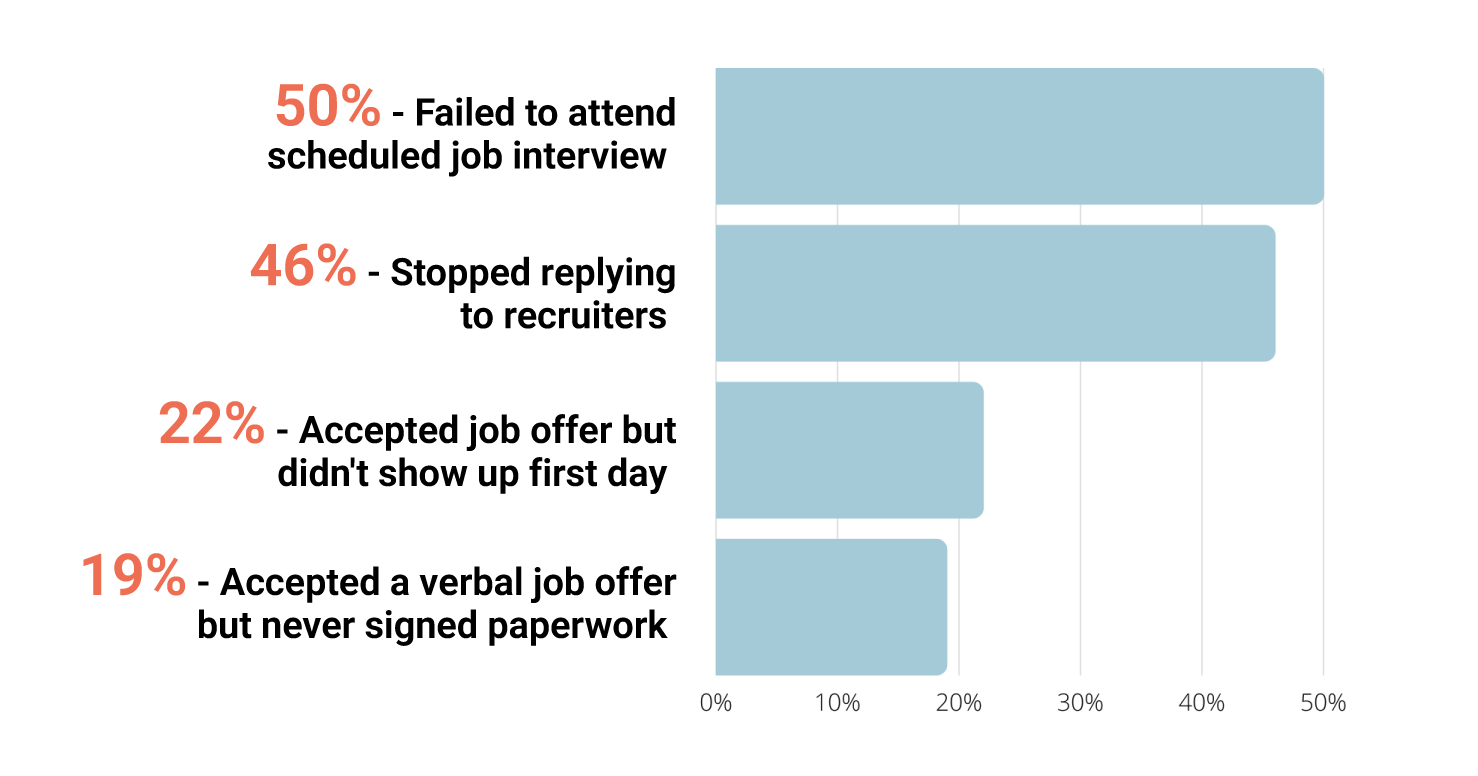 What drives candidates to ghosting?

Ghosting during the selection process may become a major problem for the company. But why are candidates making this decision?

There are several reasons, from the large number of vacancies in the market, which provide candidates with a wider variety of options until they choose another offer, to discontent with salaries and benefits, as well as the decision that the work is no longer a good fit.

There are also reasons related to the process itself. Tiring selection processes, lack of communication, unilateral communication (where the candidate isn’t able to contact the company) and lack of feedback about the process as a whole are also decisive factors.

According to a survey by CareerBuilder , the leading cause of worker frustration when looking for a job is slack of communication – it took too long to receive word from the company or its communication on the next steps, for example.

Another survey by Robert Half revealed the following main reasons for ghosting:

Consequences of ghosting for professionals

Selection processes demand efforts from recruiters and executive managers as well as operational costs such as platforms, tools and consulting services.

In other words, when a candidate disappears during the process, the company has to foot the bill for direct and indirect costs.

According to Bruno Mota, Head of Recruiting at Alstra

“If a candidate simply disappears during the selection process without so much as a word, we become hesitant to consider them for future opportunities, regardless of how good the professional is in their field.

Unforeseen circumstances happen and we know that more interesting opportunities may arise for the candidate, but it is important for the professional to notify the recruiter of their change of plans as soon as possible so the recruiter can move on with the process or even suggest some sort of negotiation, if applicable,” says Bruno.

What can companies do to try to avoid ghosting?

Ghosting by candidates is a practice that has been on the rise in the last 2 years, causing delays and increasing costs for selection processes around the world. So, what can your company do to avoid this type of situation?

Here are some tips and things we do here at Alstra:

Alstra is a solution that allows experts from several fields to work in strategic projects with renowned companies throughout the world, also helping leading companies access agile, flexible and on-demand hiring to continue innovating in the world of work. Click here to register for free.

Talent as a service